This a original waterclour study of a dress design titled “Ball Dress c1873” by Raymond Hughes (d2015). It is a large scale brightly coloured painting in watercolour with white body colour highlights of a flamboyant period ball gown. From a series of 4 that we have for sale.

Raymond Hughes (d2015) was a well known award winning dress and costume designer for film and stage. His filmography includes Return to Oz (1985), Young Sherlock Holmes (1985) and The Musketeer (2001). In 1977 he won an Emmy for “Outstanding Achievement in Costume Design for a Drama or Comedy Series” for “The Palliser” and has been nominated BAFTA TV Awards (The Far Pavilions and Prince Regent).

Remember to Subscribe to this website to ensure that you are notified of NEW stock and of future exhibitions. See the “Follow Me” box, in the side bar on the left. 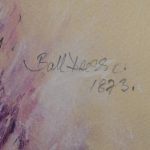 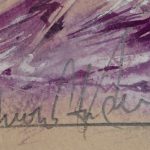 October 25, 2016  Posted by Steven at 4:01 pm Illustrations, other Artists, Pictures Tagged with: Current